Electric Vehicle Battery
For Two-wheeled
For Tricycle
For Four-wheeled

The energy issue is an eternal topic in today's world. It has led to the development of electronic devices, new energy vehicles, and smart grids. Solar energy as a clean and sustainable energy source can make up for the deficiency of the battery, and the battery can make up for the intermittent problem of solar energy. How to organically integrate solar cells and energy storage batterys? Recently, Prof. Qiquan Qiao (Corresponding author) from South Dakota State University in the United States has summarized, discussed, and looked forward to the problems encountered in the design of an integrated system for “solar cell-energy storage battery”. Among them, the three important parameters in the " solar cell-energy storage battery " integrated system: energy density, efficiency, and stability are each interpreted one by one.

Today's mass consumers rely heavily on energy technologies and their development. The current three key energy-related technologies are smart electronics, electric vehicles and smart grids. Intelligent electronic products rely on batteries with limited capacity and require the use of wired connections to frequently charge electronic devices. Solar energy or photovoltaic provide the possibility of charging the battery because in the outdoor sunlight, the energy density of the solar energy can reach 100 mW /c㎡ . At present, another prosperous market is the electric vehicle industry. Although electric vehicles do not produce carbon emissions, most of the electricity used by the vehicles comes from the fossil fuel-driven power grid. Unless vehicles use electricity from renewable sources, the sustainability of electric vehicles is of little significance. In addition, the distribution of charging stations also limits their practical application. Distributed generation such as photovoltaic power generation is the most suitable charging method for electric vehicles. Another foreground application is the power grid. The application of renewable energy is steadily expanding. The biggest problem with using photovoltaic energy is the lack of sunlight at night or on cloudy days, resulting in intermittent power supply during use. This intermittency can result in power fluctuation output, which is a key issue for grid applications. Therefore, power companies limit the power of photovoltaic power into the grid. As a result, the potential of photovoltaic power generation is not fully utilized. The energy storage battery can solve these problems. The battery can be charged during the day and discharged at night, which provides the possibility of photovoltaic power generation access to the power grid.

The traditional method of using a solar cell to charge a battery is that the two systems are designed independently (FIG. 1A), which involves the solar cell and the energy storage battery connected as two separate units by wires. Such systems are often expensive, cumbersome, and inflexible. They also require a relatively large space. In addition, external wires can cause power loss.

Combining production capacity and energy storage into one unit to achieve an integrated design will effectively solve the energy density problem of solar cells and batteries. This design has the characteristics of miniaturization, which in turn reduces the cost and increases the practicality of the photovoltaic system. Although there are many advantages, there are still great challenges in terms of efficiency, capacity, and stability. At present, research in this area is still in its infancy. The focus of research is mainly on the design of materials and devices. 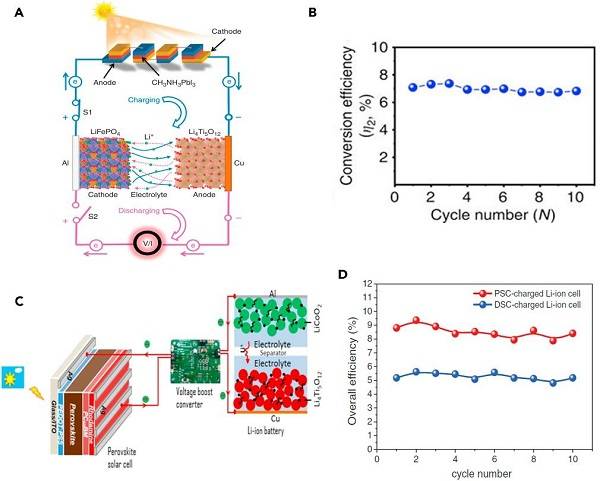 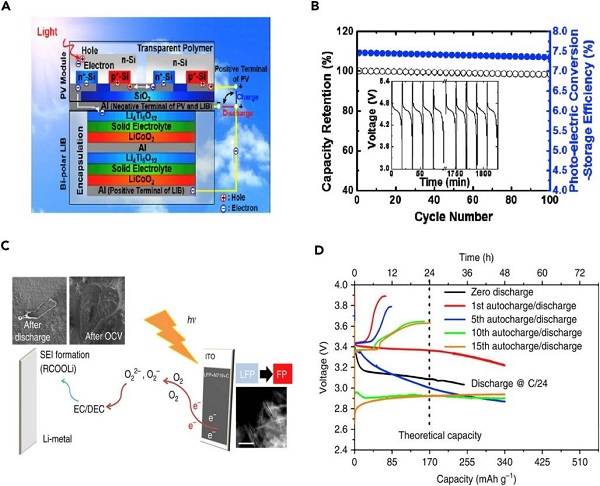 A schematic diagram of a three-electrode (Figure A) design of a silicon solar cell filled with a Li4Ti5O12/LiCoO2 lithium ion battery and (Figure B) Photo-electricity charge/constant current discharge cycle performance. A schematic diagram of the two-electrode design (Figure C) and the charging process and (Figure D) charge/discharge voltage curves of the mixed dye and lithium iron phosphate as the positive electrode and the lithium metal as the negative electrode. 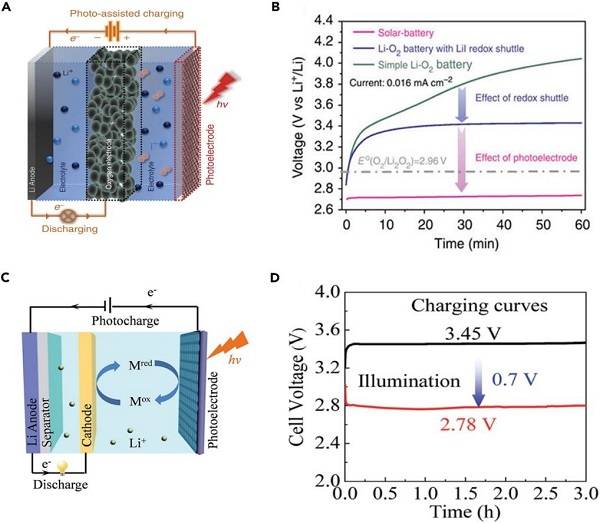 A schematic diagram of a solar rechargeable redox flow battery (A) based on a Li2WO4/LiI dual-phase electrolyte and (B) a Laser charging and constant current discharge voltage curve. An integrated (C) schematic of a dual silicon photoelectron chemical cell and a bismuth/bromine redox flow battery, (D) constant current discharge curve and (E) overall efficiency.

Conventional lithium-ion batteries often use a roll-type packaging method to increase their energy density, but it is not feasible for a "solar cell-energy storage battery" integrated system. Because the lithium-ion battery's packaging affects the area that receives solar energy. The number and power of solar cells need to be matched with the energy storage section to solve the available PV surface area, the number of possible stacked cells and the power matching requirements. The use of high specific-capacity materials as electrodes can increase the overall energy density of the system. For example, silicon-NMC batteries have an energy density of 400 kW/kg, and silicon is a photovoltaic material if silicon can be used as a lithium ion in an integrated system. The electrodes can also be used as photovoltaic electrodes, which will be an ideal design. Silicon solar cells require a high degree of crystallinity, and the insertion of lithium will reduce the crystallinity of silicon, which requires finding an optimal balance point. The study of lithium metal batteries also offers the possibility to increase the overall energy density of the system. In addition, it has been reported in the literature that the photoconversion material perovskite has been shown to have the ability to intercalate lithium ions, and that doping lithium ions in perovskites has a positive influence on its photovoltaic performance, which makes it possible for perovskites to become integrated photovoltaic cells. System high-capacity dual-function material. For applications requiring higher volumetric energy, it will be more appropriate.

Stability needs to consider light stability, electrochemical stability, and environmental stability, which requires careful selection of electrode materials. Although people have made gratifying progress in the study of the stability of perovskite solar cells, they are still at a preliminary stage of research. If perovskite is selected as the photovoltaic part of the integrated system, there is a need for greater research on perovskites. Break through. The use of liquid electrolyte is also not conducive to the stability of the system, you can choose to use solid electrolyte to improve the overall system safety and stability. Because the solar cell part will generate heat, the high temperature performance of the energy storage battery electrode material must be considered at the same time.

The integrated "solar cell-energy storage battery" system is still in the early stage of research and development. The literature reports so far have focused on the feasibility of innovative material development and new equipment designs. Future research should continue to develop in this direction. The novel design needs to be combined with high capacity, high efficiency and more stable materials. Optimization of the integrated system can use the following strategies, such as the use of energy conversion and storage of dual-function materials, the use of large-capacity energy storage materials, maximum power tracking, integrated lithium-ion capacitors, use of solid-state electrolytes, improved compatibility between electrochemical electrodes and electrolytes, etc., Integrated systems can use simulation or modeling methods to better predict system performance and provide better design solutions for integrated systems. In addition, future efforts should combine the integration of "solar cell-energy storage battery" systems with practical applications such as sensor networks, wearables, and electronic devices. Although the current commercialization of "solar cell-energy storage battery" integrated system still has a long way to go, its development will greatly benefit from the current rapid progress in the field of photovoltaic and battery. Its future development will also be directed toward low-power, compact applications, and then to large-scale energy applications.